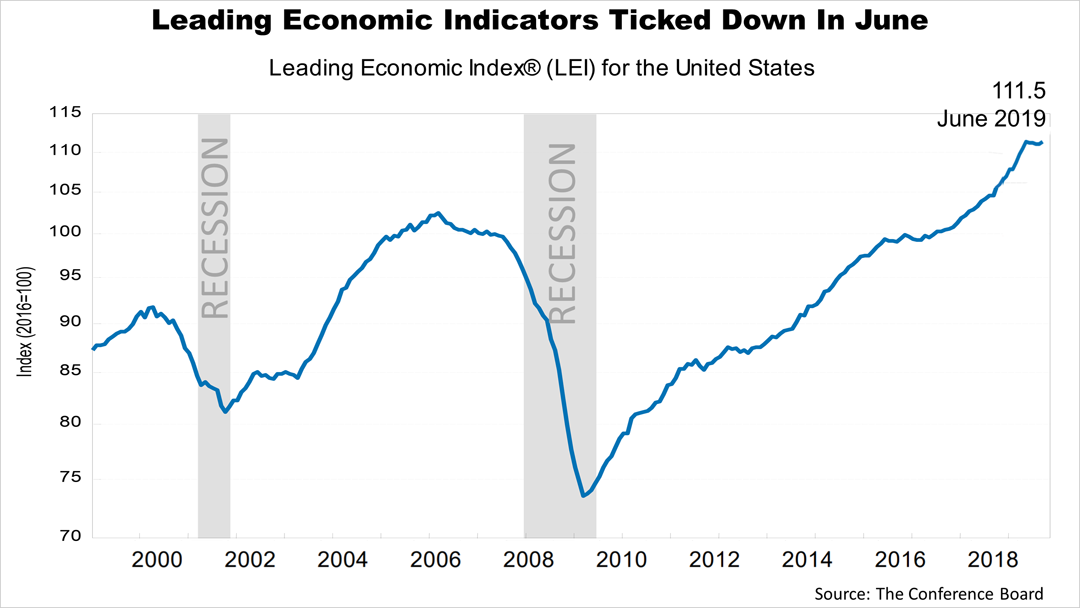 "The US LEI fell in June, the first decline since last December, primarily driven by weaknesses in new orders for manufacturing, housing permits, and unemployment insurance claims," said Ataman Ozyildirim, Senior Director of Economic Research at The Conference Board. "For the first time since late 2007, the yield spread made a small negative contribution. As the US economy enters its eleventh year of expansion, the longest in US history, the LEI suggests growth is likely to remain slow in the second half of the year."

A collapse in the LEI is a reliable warning that a recession is possible. The LEI is a composite of 10 forward-looking economic benchmarks, including interest rates, business orders, stock market prices, and the employment situation. However, not every collapse in the LEI is followed by a recession. A recession grows more likely only after the LEI collapses month-after-month for many months. June's downtick — the first in six months — could be the precursor to a recession, but the Federal Reserve's policy easing has halted economic stall-outs in the past. For example, in June 1998, an inversion of the yield curve was met with a reversal in Fed policy enabling the 1990s expansion to roll on for nearly three more years. The Fed, on June 4th, reversed its long-held stance that it would continue to hike rates because it expected higher inflation.

The Standard & Poor's 500 stock of U.S. large companies, after hitting a new all-time high on Monday, closed on Friday at 2,976.61, just shy of its all-time closing high.